So, you’ve finally invested in your dream truck, and it’s just not performing like you want it to be. Installing a tuner is one of the easiest ways to get more out of your vehicle. These devices are a cinch to install, and they make sure that your truck’s engine is always performing at peak level. We’ve broken down the best tuners for the LB7 Duramax engine to help you get more power out of your truck.

At a Glance: Our Top Picks for Tuners For LB7 Duramax

In 2001, General Motors discontinued their 6.5L Detroit engine, replacing it with the 6.6L LB7 Duramax engine. The Duramax was a much-needed update: it introduced the new common-rail direct fuel injection system.

This improvement decreased emissions, and it improved the engine’s overall performance. It would take GM’s competitors Dodge and Ford several years to catch up with the release of their own common-rail injection systems.

Available in the heavy-duty GMC Sierra and Chevrolet Silverado and the medium-duty GMC TopKick and Chevrolet Kodiak, the LB7 Duramax was wildly popular, winning “best engine” awards. The engine employed aluminum heads, shocking most buyers. The change from cast-iron to aluminum didn’t affect the engine’s performance. Aluminum heads are now used in several other engines because they are lighter and just as durable. In 2004, GM replaced the 6.6L Duramax LB7 with the Duramax LLY to comply with emissions standards.

The tuners in this review will only cover 6.6L Duramax LB7 engines found in:

Are All Tuners The Same?

Tuners are great tools for getting the most out of your Duramax LB7. You can program them to monitor the fuel, output, and timing parameters of your engine, but not all tuners are the same. Each model varies in what it can do, so you should choose the one that has the abilities that are right for you.

Some tuners have minimal features, such as increasing your torque, your horsepower, and your fuel mileage. If you aren’t doing much towing and you just want to save a little money at the pump by increasing your MPGs, then these models will suit you just fine.

If you are driving long distances for work – or doing a lot of towing – then a more sophisticated model might suit you better. These tuners have many more features, such as code readers, LED displays, customized engine monitoring, and driving advice to boost your MPGs. You can set your tuner to increase your torque when you are towing so that your engine works at its peak performance.

Benefits of Installing a Top of the Line Tuner

Below are the main benefits of investing in one of these tuners:

If you are shopping around for a tuner, chances are you are looking to improve your truck’s fuel mileage. You can program your tuner to monitor your RPMs to get the most out of your fuel mileage.

Many tuners will alert you if there is a problem with your truck. Based on what the code says – and your mechanical abilities – you can either fix the problem yourself (and erase the code) or bring your truck to the shop. This can eliminate a pricey trip to the shop for a relatively simple fix you can remedy in your garage.

Adds to the Life of Your Engine

Tuners read the sensors in your engine, making sure it is operating at its best. The tuner helps monitor the conditions of your engine, so you can address any issues before they turn into big problems.

Before we get any further, here are our top 3 favorite picks from this review:

We’ve reviewed the best tuners for the LB7 Duramax engine. Whether you want to get better fuel mileage or you’re looking to optimize your engine performance, there is a tuner that is perfect for your needs.

In a slight upgrade on the Insight, the Edge Evolution CTS2 Tuner has all of the features with a few bonuses. It still promises to boost your torque and increase your horsepower (up to 180HP and 440 ft-lb TQ for this model, depending on the diesel engine).

The Evolution has extra tuners for optimizing your output – whether you are driving or towing or you want to increase your fuel economy. The Evolution takes the Insight a step further, with additional tunes for shifting firmness and shift points for a smoother ride. You can even manage your fuel pressure and your torque with this programmer. With the Edge Evolution CTS2 Tuner, you will always know what is going on with your truck.

When designing the Evolution, Edge took everything that was great about the Insight and ran with it. While you can still cater the programmer to your own needs, just like in the Insight – like programming service and maintenance reminders – we think there is too much going on in this model. There are many complaints that the screen freezes and many customers aren’t convinced it does that much to improve your MPGs. If you want the extra capabilities that the Evolution offers, you have to deal with the problems they cause, too. 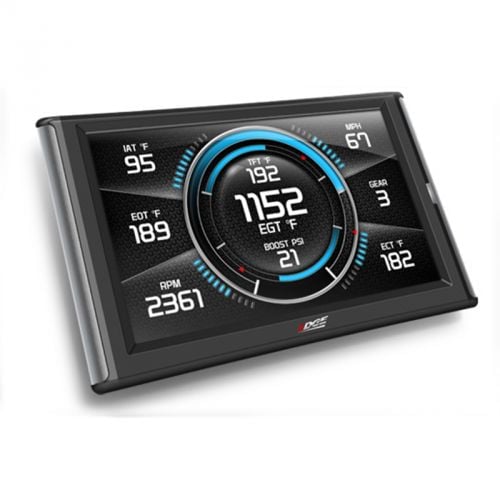 The Edge Insight CTS3 is the first of the two more tech-savvy tuners on our list. It is also a plug-and-play, but it comes with a 5” high-resolution touch screen that helps you monitor your truck’s performance in real time. You can program the Insight to adjust any of the parameters of your vehicle, including but not limited to speed calibrations and rev limiters for your transmission.

With the Insight, you customize your display always to show you what the tuner is doing, and you can quickly check all of the parameters with the easy navigation system. For even more convenience, the tuner comes with a dash mount for easier access.

The Edge Insight is a handy tool if you are looking to improve your gas mileage. One of its many features includes a driving coach to help you learn better driving techniques to improve your MPGs. There are some complaints that it lags on older vehicles, so you might need to install more sensors to get a better reading. Overall, it’s a good investment for the LB7 owner who wants a tuner a step above the rest. 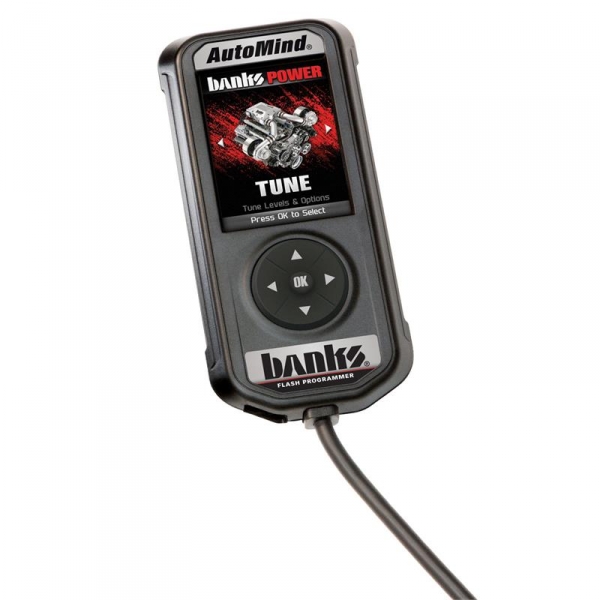 Many LB7 Duramax owners do lots of different types of driving: highway driving, city driving, and towing. The Banks Power 66411 Automind Programmer has custom settings preset to optimize your fuel economy, improve your acceleration, and boost your torque for hauling large loads.

The Banks Automind reads the sensors of your engine to help you monitor its condition and performance in real time. It is easy to install – with a plug-and-play feature – and it fits 2001-2016 GM 6.6L Duramax engines. This means that you can use your programmer if you buy a new truck, instead of having to invest in a new programmer. The Banks Automind will save you money on trips to a repair shop by letting you read and clear DTC codes.

For LB7 owners who use their truck for work and play, then the Banks Power 66411 is the best investment you can make. Since most engines are designed with one tune, you can switch tunes with the programmer – depending on what you are doing that day. The preset options for towing and highway driving produce optimal engine performance so you can get the most out of your truck. As long as you don’t mind not being able to tune on the fly, then the Banks is a great investment.

For over ten years, Power Performance Enterprises, Inc. has cornered the market in tuning products for diesel engines. Using the EFILive platform, PPEI’s EFILive AutoCal Tuner is specifically designed to bring more power and performance to your truck.

Compatible with all 2001-2007 Duramax engines, the owner uses the specs of your vehicle to custom-design your own AutoCal Tuner. Five different tunes increase your engine’s output, from optimum drive to tow capacity. You have the option to add a DSP5 switch to move through the power levels, which makes it easier to operate. The real winner of PPEI’s EFILIVE AutoCal Tuner is the Key Lock option – it keeps anyone else who drives your truck from messing with the tuner’s settings.

If more power and better fuel mileage are what you are after, then PPEI’s EFILive AutoCal Tuner is for you. Kory Willis – the owner of the company – custom-designs every tuner for every truck. With five different power settings to boost your engine’s performance for different output applications, the benefits of this tuner don’t end if you mod your truck. Just send it back to Kory, and he can update it for you. 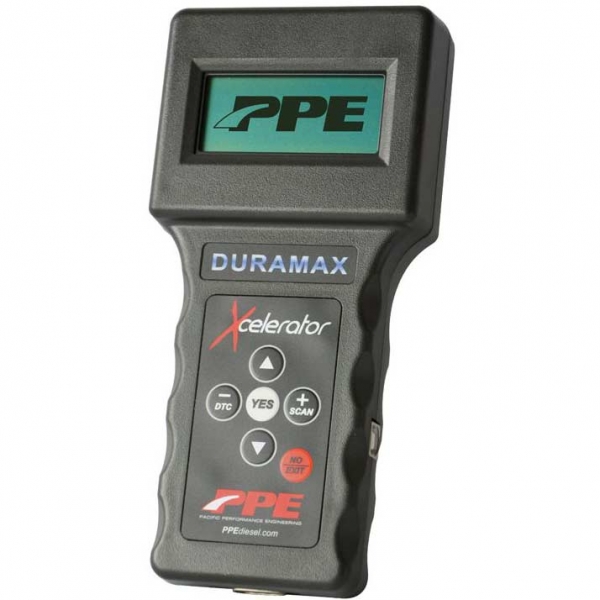 For a more responsive throttle and smoother shifting, LB7 owners love the PPE Xcelerator Standard Power Programmer. It includes five settings to help you get more power out of your truck by adding torque and increasing horsepower. The programmer reads real-time data so that you can keep an eye on your engine.

The PPE Xcelerator is completely updatable online, eliminating the inconvenience of having to send it off for updates. You’re less likely to get a ticket once you reset the speedometer based on your tire size and govern your top speed.

Unlike other programmers, the PPE Xcelerator also adjusts your drive train for even better performance, and it allows for more modifications down the line. If you have a problem, you can read and clear diagnostic codes for minor repairs, saving you money and aggravation.

When you want a user-friendly and efficient programmer, then the PPE Xcelerator is an excellent option. You can update from your computer every time you mod your truck instead of having to send it off. You can check the real-time data to keep an eye on your vehicle, and you can clear out minor DTC codes after repairing (instead of making an expensive trip to the mechanic). The verdict is out on if this programmer actual improves your fuel efficiency, but it is still a great tool to have.

When you are looking for a tuner for your Duramax LB7, many companies will promise improved performance and increased fuel economy. Only the top of the line models will deliver on those promises while optimizing your engine depending on how you are using it. Any of the models on this list will give you more power and better MPGs without having to make any costly modifications.

Scroll back to top